Food for thought for tech gluttons - Competitive advantage in ERP

Most restaurants are closed at the moment.

But I still want to talk about them.

Specifically, the kind where you go up to a buffet for your food and then go back for as many servings as you like. What are the called again?

Eat as much as you want restaurants.

Yes. That's right. To some people, that's what they're called.

But there are two types of people. The other kind have a different name for these eateries.

Eat as much as you can restaurants.

That one word is a nuance, but it tells you a great deal about the person.

I love this. Spotting slight nuances in communication and using them to make generalisations about how people think.

Some of these 'patterns' are on a linear scale. At first, this one looks linear with a kind of tick-tock optionality.

But there could be other ticks on the scale too. What about Eat as much as you NEED?

Nobody calls them Eat as much as you need restaurants, but that doesn't stop me having fun with my scale.

That'll do - I'll bank that scale and look for nuances people use so I can place them on it.

Another - Matcher vs. Mismatcher sorts people who look for accord and agreement vs. those who focus on gaps, differences and disagreement.

I'm sure you've met both of these people - the and vs. the but the people.

"What's with the but face?"

By the way, don't call them "but people" to their faces. And definitely don't say "What's with the but face?" if they frown mid-conversation. 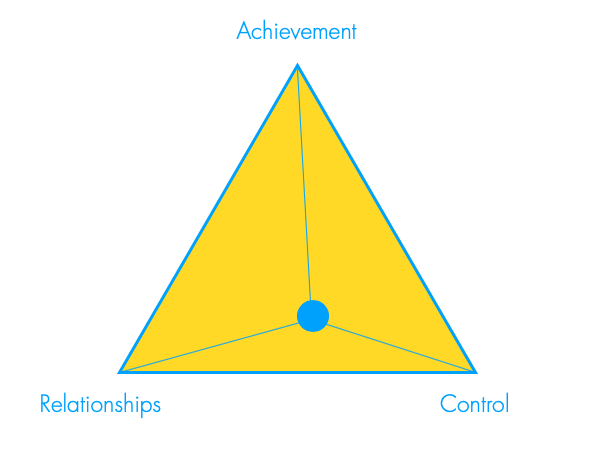 Where are you on that scale?

I once stumbled on a book titled The Four Fold Way by Angeles Arrien. It's a study into ancient cultures and it describes 4 Tribal Archetypes that exist in every tribe - the Teacher, the Healer, the Visionary and the Warrior.

I won't go into detail here - but it's accidentally the best psychometric model I've ever come across. Again, you can place people on a 4 box grid based on the words and actions they use.

It's useful to understand how people think and what motivates them. Or, more specifically, it's useful to think that you understand it. To have a model for it. It helps you work with them, deal with them, communicate with them, and manage (or get managed by) them.

Taxonomies like this aren't just useful with people and behaviours though.

One slightly more complex Meta Programme reminds us of this - the Primary Interest Filter says that people are primarily interested in either People, Places, Things, Activities or Information. Again, a generalisation.

We can also taxonomize and categorise Places, Things, Activities and Information. After all, this is what we encounter when we search for holidays, shop online, look for events and search the web.

All of these things have meta-data - both implicit and explicit - that helps us sort, filter, manage and generally cut through the crap when we're working with them.

Why am I telling you this?

I'm not going to tell you just yet. Instead, I'm going to give you another model.

In the world my company operates in (ERP), lots of big companies spend millions on big complex systems to run a spaghetti of big, hairy business processes. There are hundreds of possible business processes and a handful of IT systems that are scalable and flexible enough to deal with them.

Software vendors put out new versions of their solutions periodically to ratchet up their licence revenue. Consulting firms who implement the software (and conveniently get a kicker from the software vendors for helping) also jump on the bandwagon to sell 'transformation programmes'.

Trouble is, most of the big companies we speak with are confused by the choices available to them. The menu is too confusing and they don't know what to do.

They can't work out which path to take, and they don't know who to believe - because they're being targeted by a Gatling gun of new features to evaluate - aimed as it rattles out 6,000 rounds per minute - by people with a vested interest in their own advice.

"At least they have choice though - it's an Eat as much as you Want (Desire) decision."

Because of my perverse fascination with models and Meta Programmes, I created one to solve the software roadmap confusion problem that these people are facing.

We've used it in anger a dozen or so times now and our customers love it. So we copyrighted it and it's available in a detailed guide.

The Portfolio Package Matrix (©Resulting Ltd 2019) is based on 2 linear scales.

The first one takes Business Processes and maps them to the extent they provide Competitive Advantage - with Bottom Line benefit at one end and Top Line at the other end of the scale. This means the processes that drive efficiency and cost saving are conveniently separated from those that drive sales and growth.

In the middle, we plot commodity processes - those that you need to do just because you're in business in the first place. Posting Journals, for example, doesn't affect your competitive advantage, but you still need to do it so your books balance.

On the second scale we plot how you underpin your processes with technology. Specifically, have you used Standard (off-the-shelf) package functionality? Or, have you heavily customised things it to suit your 'unique' needs and created lots of Bespoke code?

At the other extreme, have you opted for Vendor Innovation - clever new bleeding-edge software like Cloud based, AI enabled, Robotic Process Automation type stuff.

If you're following this, you'll already be visualising the resulting matrix... 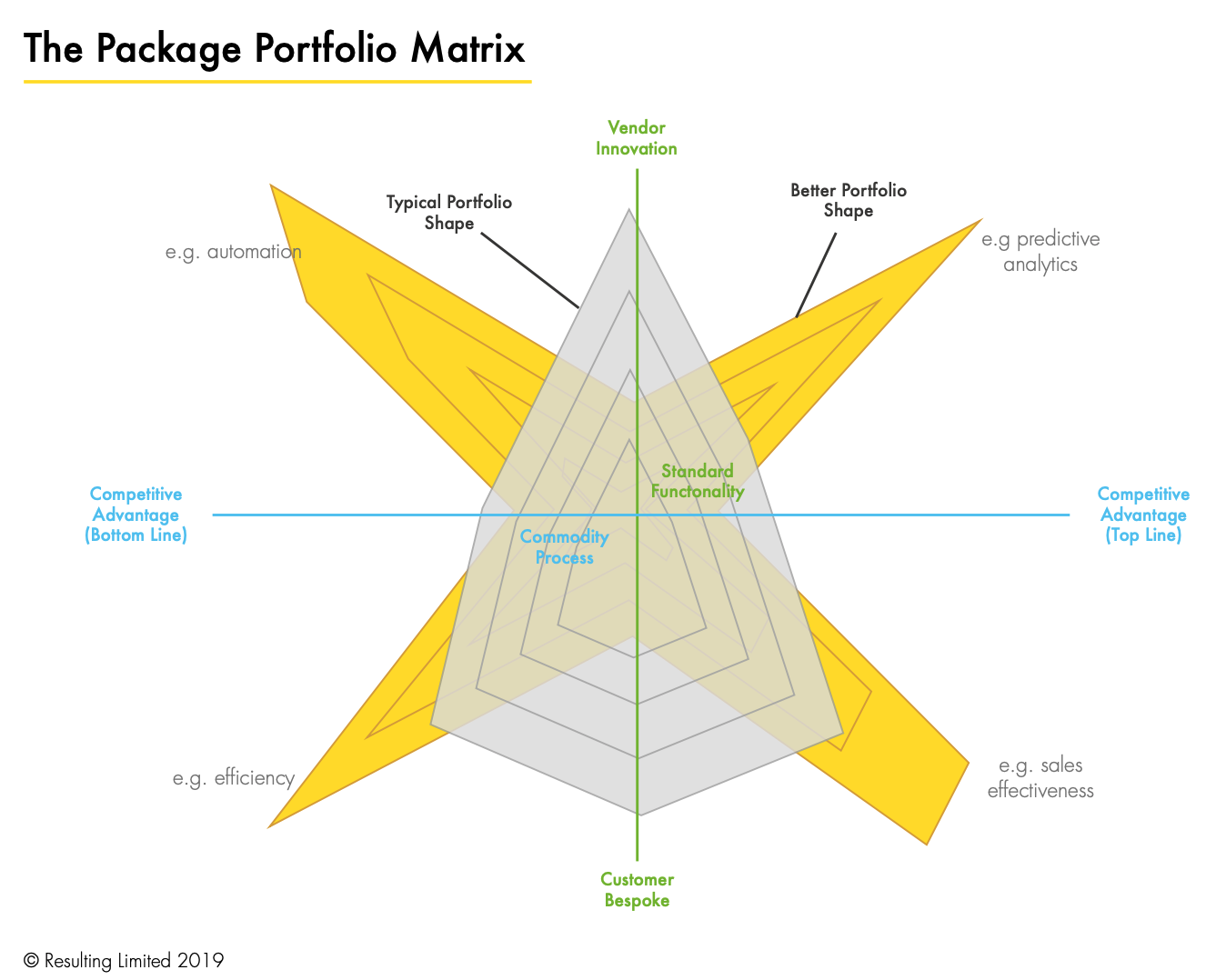 Most companies bespoke perfectly good standard packages like SAP to the back-teeth to deliver unique-to-them business processes that have zero competitive advantage.

Instead, they should be using standard functionality to do commodity stuff.

Worse, they've failed to customise their software to deliver business processes that should drive competitive advantage.

And the Cloud-based Vendor Innovation stuff is another story. Generally, it's going to give you a short-term dopamine hit of Competitive Advantage - because as soon as your competitors jump on the bandwagon, everyone's on the same level playing field again.

Because it's generally harder to customise, your advantage comes from the fact that you use it and not how you use it.

They're great for commodity processes, but buyer-beware if you think they'll bring long-lasting competitive edge in every case. It's a double-edged saw-tooth sword though. What if you don't adopt it and they do?

Anyway, if you're interested, we've built a slick model and a set of cool tools that help customers with complex ERP - especially SAP and S/4HANA - deal with this confusion and plan their way forward. Message me if this floats your boat.

Back to the buffet.

I lay awake last night thinking about the Eat as much as you can thing - and the notion of Gluttony. My mind wandered and I wound up thinking about the 7 Deadly Sins and the movie Se7en. Not a useful palette of imagery to accompany insomnia.

Obviously, I mentally meandered on to Foie Gras.

Like the fat guy in Se7en who's tied to a chair to eat himself to death.

Foie Gras involves French farmers force feeding Ducks or Geese with high starch grain using a tube and a pool cue. They ram the grain down their gizzards for a month or so until their liver becomes engorged with fat.

When they're fat enough, they chop the animal's head off and make its liver into tasty pâté.

I say French farmers. The Spanish and Bulgarians do it too. Oh, and the Americans.

And they don't really use pool cues - that was over-dramatisation.

Fortunately, breeding animals in this way it is being gradually outlawed in most humane countries - meaning that ducks and geese won't be forced to Eat as much as they can for much longer.

But Forced Gluttony relates quite nicely to Cloud Software.

Companies who are gluttons for the marketing tactics of the vendors of these snazzy cloud solutions; companies who opt for the double-edged saw-tooth dopamine hit of competitive advantage; companies who think that Ariba, Concur, SuccessFactors, Fieldglass, Coupa, Salesforce, Workday (to name a few) are going to transform the way they operate.

Be careful of the Forced Gluttony you're opting for,

Because the vendors of those solutions will release features down a DevOps enabled grain chute faster than your gorging gizzards can guzzle them.

And you'll have to swallow the lot.

I have real war stories of companies having to run training and change management programmes because their vendor force-fed them new functionality into a quarterly release.

They didn't order it. But they had to suck it up.

I've spoken to companies who'd implemented functionality that their SaaS vendor subsequently removed because 'few people were using it' - meaning they had to change their business processes on-the-fly to deal with the removal.

I've spoken to one who had this happen only to be told by their software vendor that they were then turning the feature back on again due to popular demand (aka uproar).

"We're going South. No, North. No, sorry, South again - or South by South West. Or something like that...."

When you make important technology decisions - like which solutions to choose and in what sequence - make sure you do it by first understanding the scope of your business processes.

Then apply a logical, practical model or Meta Programme to help you make sensible decisions - so you don't wind up accidentally eating as much as you can.

Who influences where CIOs drink beer?

What really happened to the 3 little pigs?

The Rise and fall of Sabine’s Schnitzel Empire