S/4HANA Skills - Wake up and smell the SAP roses before it's too late ...

Sometimes I talk to people about writing.

Or more specifically, about communicating.

And we often touch on the subject of altering your words to appeal to everyone. What I mean by this is sitting in the recipient’s position and ensuring that the way you communicate means something to them and not to just you.

And super useful for marketers, salespeople and, well, everyone who communicates.

When you’re communicating to people in different countries, cultures and critically, across different generational groups it’s easy to convince part of your ‘audience’ while you totally confuse or alienate the rest.

I have a metaphor for this.

If I asked you to imagine holding a rose, being careful not to prick your fingers on the sharp thorns of its stem as you hold it....

Before lifting it close to your nose and taking in its sweet scent...

I’d probably piss you off a little.

You might have been thinking about a red rose or a white rose - but not a blue rose.

Painting my rose blue ruined the story for you.

But if I’d have coloured it red, I’d have ruined it for the people with a mental image of a white rose.

So it’s probably best not to give the rose a colour at all - because that’s the detail in the story that risks ruining it for any of the people.

I use this black and white metaphor for specific effect - to illustrate the point of thinking about your audience when communicating. Be watchful for roses in your communication whether red, white or blue.

However, I’m now going to mark out a deliberate blue rose to you in what follows. I’m going to talk about something that is meaningless to some of you. But it’s meaningful enough to enough of my LinkedIn contacts for me to invest time in writing about it.

And, if the context is meaningless to you, I’d suggest the content is probably still reasonably interesting.

Much of my career has kept me in close proximity to a piece of software called SAP. It’s a German product used by a lot of businesses to run their business. When I say businesses, I don’t mean corner shops and florists. I mean BIG businesses.

9/10 of the worlds biggest companies run SAP. I once read that 80% of the world's products have passed through and SAP system in some way. Which means that something you’ve used, read, consumed or relied on already today (and it’s 08:15 where I am) was ‘delivered’ by an SAP system.

The world pretty much runs on SAP.

SAP has been around since the 70s but really took off in the mid 90s with the launch of their R/3 product. And a whole ecosystem of consulting firms, add-on software providers and recruitment has cruised in it’s tropical slipstream ever since.

My good friend John Grant at IT Jobs Watch will tell you with a high degree of certainty that SAP has represented 12% of the UK contract jobs market since 2005. 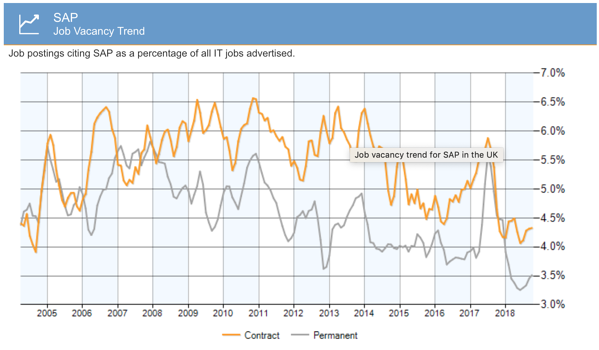 And the skills involved in building and tweaking SAP systems are extremely (and I mean extremely) broad. It covers every possible business process in every possible industry. Sales, Finance, Procurement, Production, Warehousing, Service, Maintenance, Payroll, HR each have their own nuances and their own group of ‘consultants’ with expertise in how to configure SAP work in a slick way. Then there are techies who build the systems and write custom code to do all manner of clever shit.

SAP is a beast.

Projects take anywhere from 12 months to 5 years. Some never actually finish [cough] Lidl [cough]. Even changing SAP to make a few tweaks so that a business can adapt to its ecosystem can take 6 months.

SAP has a reputation for being a clumsy, slow, complex beast. And there are lots of horror stories of projects being over-budget, over plan and not delivering their business case.

So, having worked in this space for 20 years or so, I have an observation and a prediction.

Both worry me enough to go into stern words - because how we as an industry deal with it could enable or cripple a future generation of business performance much more than Brexit to the power of Trump ever could.

In the early years of SAP more companies wanted it than there were people who knew how to configure it. This meant that there was a waiting list of ‘implementations’ and high rates and salaries of SAP experts due to the supply and demand imbalance.

As companies and consulting firms invested in skills and people followed the gold-rush of jobs, the supply and demand imbalance corrected itself bringing costs back in line.

But having established a position as market leader over the part of 20 years, SAP have recently announced a total re-platform of their software to run faster, in the cloud and to be much, much simpler to work with. This new world is called S/4 HANA and will create a new demand for SAP skills in what is now an ageing workforce.

I’d much prefer to sit in Costa writing shit like this.

What really happened with supply and demand is people like me with 10 years SAP experience got promoted to more senior roles or shifted to a super-lucrative contracting lifestyle. While all the cool-kids focused on more interesting stuff like websites, apps, digital marketing and start-ups. Meaning that nobody really followed my generation through to pick up SAP skills.

There aren’t many twenty-somethings doing SAP. The Hip Hop / XBox generation is busy playing with other technology.

And the people who are my age - the Britpop / ZX Spectrum generation are rapidly slowing down or retiring.

10 years contracting at £600 per day provides a nice little nest egg. If I had £10 for every time I’ve heard an SAP consultant say “One more gig then I’m done” in the past 18 months, I’d have their daily rate in loose change.

I'm too old for this shit - Roger Murtaugh

But that’s all OK because in the late 2000s the world of IT became obsessed with moving high-cost jobs offshore to India and other low-cost labour locations. It costs 80% less to employ somebody in India with the same skills so the supply and demand imbalance was addressed by a 2nd gold-rush to offshore.

Unfortunately, though, economics isn’t simple. Compound wage inflation in India and an upwardly mobile population allied to flat inflation in the countries who were doing the buying meant that the cost-effectiveness of offshore delivery has reduced over time.

The overall supply and demand for SAP skills remains broadly in check - so the world will keep turning.

But here’s the rub.

Consumers want more and want it fast. Big companies are being disrupted by young upstarts who don’t have big complex systems running their businesses. Uber, Netflix, Tesla and their mates appeared out of nowhere with nimble business models and they’ve worried my alphabetical list above to the core.

Which means that big business want to become more agile. 1 year projects need to be done in smaller increments to keep up with the competitive Joneses.

And it’s hard to be nimble and agile when your IT guys are in a different continent 5.5 hours away (ask me my story about Delhi’s half hour time zone sometime). Agile and Offshore is really hard, Plus, big companies are realising that outsourcing to India isn’t as good as they first though it might be. More expensive, quite frustrating and hard to sustain any sort of competitive edge through innovation.

This isn’t xenophobia. I sold offshore IT services for 5 years and some of my best friends live in India. It’s a fact supported by the number of companies and government departments currently reversing their outsourcing decisions.

Try and hire an SAP FICO or SD consultant in the UK today. They’re harder to find under Theresa May than they were under Tony Blair. And that's the big problem facing SAP Staff Augmentation.

Big companies need them in spades. But they exist in tiny granules.

And the drive to migrate from SAP R/3 to S/4 HANA means that this situation is only going to get worse as demand increases and the local workforce ages.

This has the potential to cripple some of the world’s biggest companies who need to adapt their business models to compete in a digital era but who won’t be able to due to a massive supply and demand imbalance and a talent war.

Which means that things are going to get expensive too.

Fortunately, SAP have decided to retire their older R/3 solution in 2025 to drive uptake of S/4. So 40,000 companies are expected to migrate their SAP solutions in 7 years. 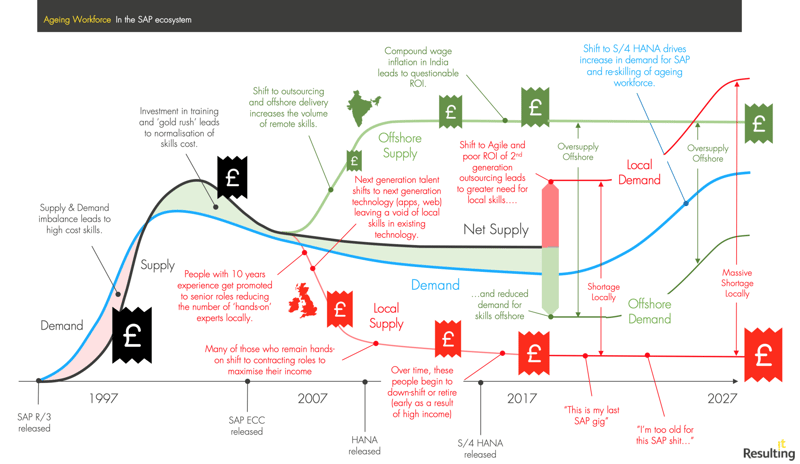 I remember reading a thread on Quora that asked if all the planes in the world could land at the same time. The answer was “yes, in theory, every plane has a home airport so there’s enough space for them all to land”.

Trouble is it would be practically impossible to land them all at the same time due to congestion and air space restrictions.

All isn’t rosy in the world of SAP.

I have some views on solutions. Our focus on self-sufficiency for SAP customers is rooted in this macro-economic challenge.

But, I’d expect that my SAP network is big and clever enough to be able to respond to this problem.

If you want to know more about the massive SAP skills shortage that faces us download "The SAP Skills Apocalypse".

In this research report we polled the SAP community to better understand how many people have S/4 skills and how long the most experience SAP consultants plan to stay in the industry.

And, we provide an action plan to build your own SAP skills in-house.